It’s been a while since Kissing Cooks last posted, but if you’ve been following us on Instagram (@kissingcooks) or Facebook, then you know that it’s not for lack of kissing or cooking (or eating or smiling or movie watching or having a ton of fun). It’s summer! Chris and I have been having quite the culinary and romantic adventure with plenty of good eats and even better smooches. Let’s play some ketchup (…or catch up)!

Since last we posted, we’ve enjoyed plenty of delicious brunches (at Toast Coffeehouse and Main Street Bistro), home cooked dinners (of chicken tacos, eggplant parmesan, cheeseburgers, and steak wraps), fabulous date nights out (including Café Formaggio, Butera’s, Wahlburgers, Crazy Crepe Café, The Gilded Otter, Arooga’s, The Cheesecake Factory (which serves gluten-free cheesecake!), and Ralph’s Famous Italian Ices, to name a few), as well as one delightful campfire meal (that Chris obviously made!) and a fireside s’mores party of two (with Pamela’s gluten-free graham crackers) during our mini vacation to the New Paltz-Newburgh area in early June. Not only did we share an amazing weekend together staying on the KOA Campgrounds (yes, I camped—in a cabin!), we took in the beautiful countryside, visited the Yankee Folly Cidery (that we discovered at The Chocolate Expo), checked out some antique shops and the Woodbury Commons, experienced our first drive-in movie (we saw Tom Cruise in The Mummy in Hyde Park), had a meat and cheese picnic at Bear Mountain, and most importantly, we ate all the best of everything that the area had to offer (with plenty of gluten free options too), including crepes and gelato (both at Sweet Bunny)!

Not to mention, it’s festival season too, which means that we’ll be hitting up as many local events on Long Island as we can possibly stand. We recently made an impromptu and quick stop at the St. Philip & St. James Church carnival, where we shared our very first authentic amusement park ride (Nunley’s Carousel aside). I’ll never forget Pharaoh’s Fury and the ginger ale I tearfully demanded afterward, especially since Chris took such good care of me (since I’m a frequent victim of motion sickness). We’re having the summer of our lives so far, adding new memories and building a stronger bond in our relationship. Taking risks (like a super fast and nauseating ride at a carnival) and trying new things is what makes every day so exciting to share with each other.

In May, we had the most jam-packed and perhaps busiest day of our lives by attending a taping of The Chew, walking through Central Park, visiting Hunter College (Chris is a former student), exploring some exciting fashion by Rei Kawakubo / Comme des Garçons at the Metropolitan Museum of Art, ate dinner at Carmine’s, and saw the phenomenal Sara Bareilles in Waitress on Broadway. Weeks later, we’re still listening to and singing along with the unforgettable songs from the sweet, sweet play. Sugar… butter… flour…

The whirlwind epic that is our first summer together doesn’t stop there either! We’ve walked on Short Beach on a hand-holding sort of rainy evening, explored Port Jefferson and Stony Brook village (stopping in Robinson’s Tea Room), had a late night chips-hummus-orange-Italian-ice picnic during a Fourth of July fireworks show, participated in a game of trivia with TriviaNYC at Hinterlands in Brooklyn, and attended Saint James Summer Nights where we had a food truck dinner from Eat Me Drink Me, the mobile epicurean, followed by some fair favorites, churros and Mister Softee, for dessert.

Also, we’re getting super inspired to make better eating, cooking, and food shopping decisions through lengthy jaunts to Whole Foods, Uncle Giuseppe’s, Trader Joe’s, as well as Sur La Table, IKEA, and The Container Store (holy storage space ideas!). Oh and we binged the entire six seasons of Downton Abbey! That’s the real cherry on the cake that is Summer 2017 (so far).

Just last Friday, we decided to use our grocery resources wisely by defrosting some drumsticks, preparing frozen sweet potato fries (Alexia), and roasting some cauliflower for a filling and savory summer dinner before doing some mall shopping. I was given a full, ready-to-eat head of cauliflower by my parents (who recently went on vacation, fearing the cauliflower would meet a moldy fate). Without ever really preparing a cauliflower side before, I did a little Pinterest reading and set forth by chopping it all up.

I love me some cauliflower. Taking cheese out of the equation (I know it seems cruel), vegetables make me so happy. I’m a girl whose eyes widen at the mere mention of eggplant, zucchini, cauliflower, broccoli, and artichokes. Some of these veggies haven’t been high on Chris’ must-eat list, but I’ve been plotting to change his mind with flavorful methods of veggie preparation that will make his palate sing. He’ll be the first one to tell you how sweet potatoes have changed the way he meal preps. I did that!

Anyway, when Chris arrived at my apartment, our kitchen waltz was soon underway. Chris deskinned the drumsticks, seasoning them with olive oil, salt, pepper, oregano, and garlic powder. While cleaning up between tasks, we both prepared the cauliflower similar to the chicken, also coating the florets with gluten free Italian breadcrumbs (Aleia’s) for a little extra kick and crunch.

Alissa of years’ past was not such a hands-on eater. That is to say that I hated (loathed, abhorred, was repulsed by, you get it) ever eating with my hands. What’s ironic is that two of my all-time favorite snacks / lunches are hand-eating foods: grilled cheese and quesadillas. This might have also been because I worked at a bank for so many years, handling cash and coins on a daily basis. Wet wipes were just as present as dollar signs filled the day because a major pet peeve of mine is having sticky or dirty hands. I’ve become less uptight about how my food gets into my mouth because I know that there are always napkins around that will do the job of cleaning my hands and face after a hearty meal, especially pretty ones with designs and phrases (in my apartment, at least). Although I confess, I still use a knife and fork with my pizza.

However, this past middle school-aged Alissa also detested the “barbaric” experience of eating some sort of chicken-on-the-bone part during a family trip to Medieval Times in Florida. For our dinner, with a jousting tournament as entertainment, large portions of chicken were distributed and ne’ery a fork and knife were in sight. Perhaps it was my immaturity that also hindered the overall experience of escape ad fantasy, but now, I’m a big fan of drumsticks. I’m much more informed and excited about food, which is why having a drumsticks dinner (after buying the package with a BOGO Free sale) was such a feasible and welcomed idea. 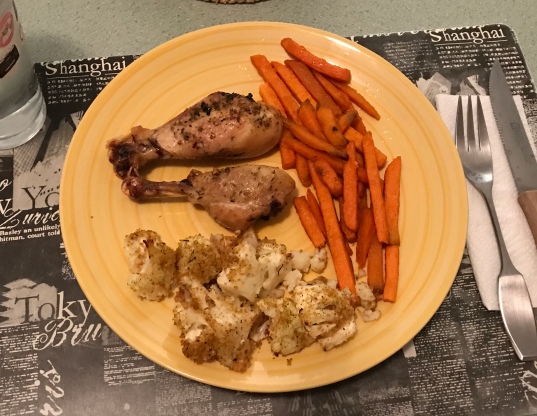 Now we’re all caught up and you see that Chris and I really are still cooking at home. Promise! Since we are the Kissing Cooks, it will always be the hallmark of our relationship because we love to eat! Cooking is perhaps when we learn most about each other and work best as a team (except for when we’re quizzing each other on movie trivia during long drives all over Long Island). We already have plenty more upcoming events on our calendars, including Alive by the Bay in Bay Shore this week, Alive After Five in Patchogue next week, and the Food Truck Fest in Deer Park next weekend. In addition, Chris and I will be attending the Secaucus Gluten Free & Allergen Friendly Expo in October, an event that I learned about on my very important and useful Find Me Gluten Free app.

You know what we’ve been up to so far. What about you? Where are you having the best food experiences of the summer? Where do you recommend the Kissing Cooks to eat? What are some of your favorite summer foods?