Deciding that the Kissing Cooks should take on a meatloaf recipe isn’t particularly novel, especially in the grand scheme of dinner planning for any American twosome. A home-cooked meatloaf is as standard a meal as hot dogs and apple pie are representative of this melting pot country of ours. Growing up, there was plenty of beefy meatloaf served, but I’ll admit, I didn’t love much of it. There always needed to be a little extra Parmesan cheese on it for me to come to terms that the meaty slice on my plate was to be eaten—no argument. That’s not to say that the meatloaf my parents made was inedible—they still make it to this day and rigorously enjoy second portions. It’s just that my palette has always swayed away from carnivorous, save for fowl, for no reason more than I just don’t often have the taste for it. Give me cheese, pasta, bread, veggies, and other leafy goodies, and I am pretty darn happy. It’s as simple as that. However, in my childhood, most foods leaned Italian in flavor (with cheese galore), which I never complained about, thus creating an enduring memory of meatloaf. Once I had my own kitchen, and cooking was up to me, interpreting my own meatloaf concoction just never occurred to me.

Now, I’m so much more aware of the groceries that I buy and how to stretch their value to get my money’s worth, especially since Chris and I are having so much fun in the kitchen. After every meal, Chris and I divide up leftovers so he can bring some to work for lunch and I can relive the previous night’s adventure for another dinner. This was definitely the case when turkey meatloaf became the star of this past Tuesday night.

You might ask, how did turkey meatloaf come to be? Well, something essential to know about Chris is that he’s somewhat of a meatball scientist (completely and unofficially unaccredited by any legitimate academic or culinary institution—I am totally granting him this title!). He’s experimented with different recipe combinations at length, combining breadcrumbs with doughnuts and adding hot sauce or brown sugar just to see what would happen. These experiences have extended to our very enjoyable turkey burger dinner from last week (see what those “Smoochburgers” are all about here). So, it was only natural to progress from meatball to burger to grand meatloaf status. I was tickled at the thought of this because as Chris and I grow as home cooks, so do our ideas.

I searched Pinterest for several different turkey meatloaf recipes, since turkey is the official meat of choice for the Kissing Cooks, and I even consulted my mother about the challenge. I already had a loaf pan for future gluten free bread baking aspirations, so step one was covered. After some clicking around, Chris and I agreed that this recipe would work best for our needs—and also, it seemed the simplest, without having to buy too many extra ingredients.

Before I get to the nitty gritty of meatloaf preparation (if there is such a thing), I wanted to share that when I first sat to write this post, I had a mild case of writer’s block. I usually have a cute, punny idea of how to kick things off. My brain was all “Loaf Birds,” because Chris and I are a couple, playing on the cliché of being love birds, and that our main ingredient is turkey. Then there was the “Birds of a Feather, Loaf Together” angle, but I don’t think I could say that title with a straight face and without Chris rolling his eyes. All was blank… until I remembered that lovely Elizabeth Barrett Browning poem (homaged above) and my writing wheels began to turn. Then, I did what any 21st century writer would do when not knowing how to start writing about the glory and pride that comes with making meatloaf. I typed into Google: “the origins of meatloaf” because I knew there had to have been some sort of beginning to the meatloaf mainstay—I just didn’t know what it was. Here’s what I found:

Wowie! Thanks, Wikipedia (a source I seldom encourage my students to use for their research papers)! Meatloaf is tried and true for more than 16 centuries, so how could Chris and I go wrong? The website goes on to list all the different ways how various parts of the world prepare a meatloaf, spanning continents where I’d never dream of eating meatloaf, such as Bulgaria, Macedonia, Greece, and Vietnam, to name a few. After all of these interpretations have been logged in the history books of cuisine, the thought of Chris and me embarking on our very own version, á la Long Island, felt all right and warm and fuzzy on the inside.

As usual we used ground turkey (Jennie-O), followed by an egg, half a yellow onion (which Chris valiantly prepared since my sensitive eyes teared up after one measly chop) (and a whole onion seemed much too much), gluten free Italian bread crumbs (Aleia’s), 1% milk, and salt and pepper. I whipped up the topping sauce, including ketchup (Heinz), honey mustard (Boar’s Head) for extra sweetness instead of the suggested standard mustard, and light brown sugar (Domino) because that’s what I had on hand. As instructed, we poured the tangy and sweet glaze over the top of the loaf, leaving some extra on the side for dipping. During bake time, we cleaned up and prepared the sides: steamed broccoli and gluten free macaroni and cheese, keeping in theme, we thought, with a hearty and classic dinner. That’s when the Riesling (RELAX) was poured and place settings were thus placed. 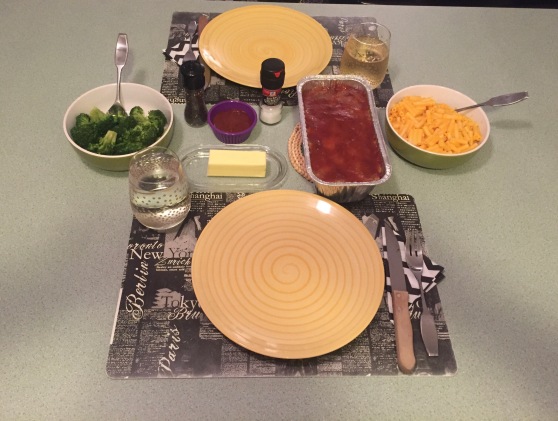 When we finally sat down, all was perfectly tasty and filling. There were certainly more servings (and onions in the loaf itself) than we could consume in one sitting. Chris was so excited at the prospect of meal prepping the same recipe for an upcoming work week’s worth of lunches. We then stored our leftovers in some containers, plopped down on the couch for a New Girl viewing, and enjoyed a mixture of sugar free white chocolate and milk chocolate pudding (an easy solution for when that gallon of milk is about to expire) topped with fat free whipped cream.